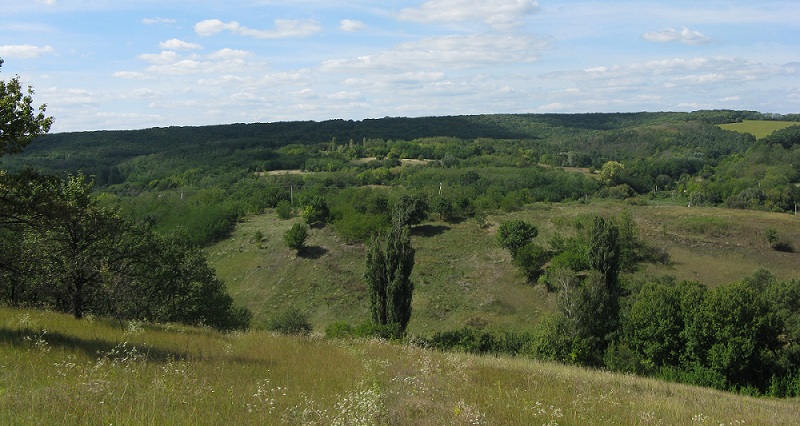 The history of these places is rooted in the distant past. The picturesque places of the Naddneprovsk Upland, completely dotted with hills and ravines, have always attracted poets, writers, educated intellectuals who are not indifferent to art, able to appreciate the beautiful landscapes opening from the high steep banks of the Dnieper to the endless floods of the "roaring", with green islands in the distance and a solemn abundance of seagulls feasting in its rich waters. Approximately in this region, the steppe part of Ukraine meets the forests of the west, sometimes forming the most unexpected combinations of flowering meadows with cool and humid forests, directed their peaks to the very sky. The village of Semigorye, which has more than a century of history, is located in a natural hollow surrounded by hills and small forests, at a distance of about 8 km from the reservoir. Even before the revolution, these places belonged to Count Lobachevsky, in the very heart of the present village was his estate with a small, by today's standards, adobe-log house. Some local old-timers still remember this sturdy and comfortable house, where a school was located in Soviet times, as well as alleys and squares that surrounded the estate, organically complementing the original architecture of the count's dwelling. The people called the village so then - Lobachikha. In the Soviet years, total globalization did not pass by Semigorye. The village infrastructure and the number of its inhabitants have grown to unexpected proportions. Everything that the then Stakhanovites and collective farm activists could only dream of appeared in the village. Among other things, a fire station, a water tower, a treatment plant and even an artesian well were built here. Unfortunately, in those years, the natural wealth of the natural steppes was completely destroyed - any slopes and inconveniences were plowed under corn and wheat. Forests were cut down, wild animals - their original inhabitants - were exterminated. Now the natural biocenosis is slowly recovering, but, of course, no one can compensate for the damage caused to the local flora and fauna as a result of intensive and irresponsible management. Not so long ago, on the territory of the village there was a small reservoir and a couple or two more in the vicinity near the village, but, either due to the illiterate management of agricultural technology in the surrounding fields, or due to natural processes, the water left. However, on the territory of the village, springs are still gushing and there are puddles in which reeds grow. Animals from all over the forest come ships to drink water. The restoration of this beautiful reservoir would be a real gift for the village and all its inhabitants. Not far from Semigorye, about a few kilometers away, there are active lakes. Three large lakes occupy about two kilometers in length, the places there are picturesque and almost deserted, because the lakes are located separately from neighboring villages and it is not very convenient to get there. Formally, the reservoirs are on lease, in the warm season, watchmen live there, but there is no intensive economic activity, rather just protection from poachers. As a social object, the village of Semigorye has long lost its significance. Now it is a tiny hamlet-like village. A dozen of grandmothers and heels of grandfathers remained here, who simply have nowhere to go, so they are living out their days. The rest dispersed in speed after the collapse of the Union. Perhaps, now these places are attracted only by enthusiasts looking for solitude from the bustle of the city, and hunters who come to the forestry to have a good time. If you do not take into account the primers, which are available only at certain times of the year, then the approach to the village is possible only from the side of Glinsk, the nearest large village located 7 km from Semigorye. Thus, the road to the city will take about 40 km along a bypass asphalt road through large villages. Svetlovodsk is a small town, here it is difficult to find the usual "charms" of a metropolis, and many goods can only be ordered via the Internet. On the other hand, for those who already strive for an autonomous existence, there is no better place than Semigorye. There are forests and steppes, hills, ravines and gullies, which provide a wide space for life and supply the necessary natural products and materials. On the territory of the former village there are old orchards, which in good years provide all the villagers with delicious apples, pears, plums, cherry plums, cherries, grapes, raspberries, strawberries and many other gifts of nature without chemicals and preservatives. The presence of large plots of free land makes it possible to grow vegetables, create gardens, and graze animals. And the lack of a dense population density typical for prosperous villages allows you to relax and calmly think about the "eternal". That is why this place has become an ideal base for creating an ecovillage. Living among nature, we learned to value its wealth, and the ready-made platform in the form of the surviving infrastructure of the village provides us with ample opportunities for creatively building projects in the field of crop production, animal husbandry, the development of various crafts, autonomous arrangement of life and, ultimately, allows us to free up time for direction energy into a creative channel for the benefit of the environment.